The Symposium’s theme was Destroyer of the gods

At Benedictine College’s spring Symposium, hundreds of scholars and new evangelizers from all walks of life met to plot the destruction of the gods.

The 2021 event was the ninth Symposium for the New Evangelization (the name is changing to Symposium on Transforming Culture). The March 19-20 weekend’s theme was “Destroyer of the gods.” The title is taken from Dr. Larry Hurtado’s book about how Christianity was the first religion to successfully unseat the pagan gods that ruled the minds and hearts of people for millennia.

The question was, can Christianity do it again? Can followers of Jesus Christ destroy the new idols of secularism?

The keynotes each addressed one of the “dark triad” of the sex, money and power that one speaker at the symposium called the distorted aim of idols from the Golden Calf of the Hebrews to our godlike celebrities today.

“This is one of the real intellectual highlights of the year for Benedictine College,” said President Stephen D. Minnis. “The speakers had fascinating things to say about the situation we face today in the world, and will face for years to come.”

“The presenters had great comments about the weekend,” said Benedictine College theologian Matthew Muller, who each year organizes the symposium. “They really appreciate the fellowship and broad-ranging intellectual scope of the weekend.”

Mary Rice Hasson finished the Symposium with a searing indictment of the new idol of distorted sexuality. Quoting Jesus’s words on the way to his crucifixion, she spoke about the extent to which the 21st century has embraced the idea that “blessed are the barren.” 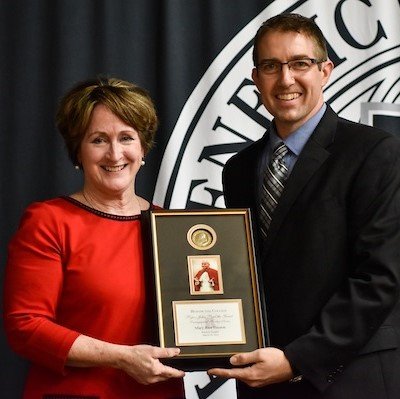 Focusing especially on transgender ideology, she said, “The idea of barrenness is tied to the idea of being self-creators.” She traced the path marriage took from contraception to today, when “Marriage has become about meeting adult desires instead of welcoming and raising children.” Nonetheless, she said, “The promise of life when we embrace who we are as a son or daughter of God is immense.”

Noontime featured speakers Deborah Savage of St. Paul Seminary School of Divinity and Mary FiorRito of the Ethics and Public Policy Center also spoke to issues of sexuality. Savage strongly affirmed the historic need for masculinity — and then lamented the misreading of women in Western thought, starting with Aristotle. FioRito presented on how authors Dorothy Day and Caryll Houselander dealt with the idol of romantic love in their own lives.

He listed the “four horsemen of decadence … stagnation, sclerosis, sterility and repetition,” and explained each one. “Stagnation” meant a “deacceleration of growth.” He said the technological boom that used to touch every sector was now concentrated in one or two areas. The “Sclerosis” in institutions and ideologies was the kind of intellectual gridlock that stops all forward motion.

“Technological progress has become mono-dimensional,” he said, with progress only in narrow fields. “Areas like transportation, energy, agriculture — even the built environment — don’t see the kind of progress we took for granted between 1840 and 1970. Further, when tech companies leave the world of tech and try to revolutionize real-world industries, those are the companies that often end up being the supposed unicorns that turn out to be frauds or failures.” He cited Theranos and We Work as examples.

Repetition for Douthat meant a continual harking back to the past.

In addition to keynotes and featured speakers, colloquium presenters offered talks all weekend long. For instance, Dr. Kevin Miller, a theologian at Franciscan University of Steubenville, addressed religious liberty. Catholics who favor the Tridentine Latin Mass have argued that after Vatican II, religious liberty ideas have become idolatrous — literally making man a God, whose decisions matter more than God’s truth. He argued that this was not the case, citing Benedict XVI and David Schindler. “Far from being idolatrous,” he argued, religious liberty in John Paul’s Dignitatis Humanae “corresponds to the reality of created human freedom by recognizing truth as something actively received by the human person.” 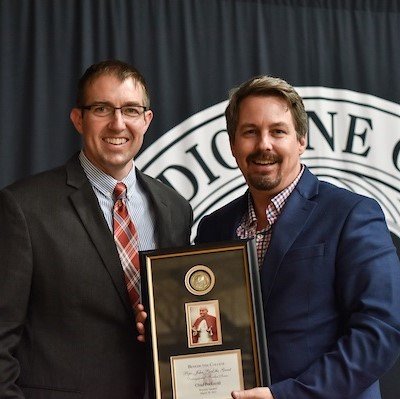 On Friday, March 19, keynote speaker theologian Chad Pecknold of Catholic University began the Symposium by explaining how “our souls conform to what we see,” a theme taken up by many speakers throughout the weekend.

He spoke of three political forms Plato addresses — Oligarchies, Democracies and Tyrannies — and how Augustine’s City of God shed light on them.

“If we become the men and women who are like our heavenly regime, bad religion doesn’t stand a chance,” he said.

President Minnis said he was excited for the future of the symposium: Transforming Culture in America. “Benedictine College’s new strategic plan will take a lot of effort, but we think it has the potential to make a real impact on the future. The college is taking its mission of dynamic community, thriving faith and inspiring scholarship and applying it to the key problems of our day. We believe that the new evangelization means transforming culture from within with the message of the Gospel, just like the Benedictines have done in the past.”

The next Symposium on Transforming Culture will be held March 25-26, 2022 on the topic “See How They Love One Another: Community and the New Evangelization.”

Benedictine College’s mission can Transform Culture in America by modeling community in an age of incivility, spreading faith in an age of hopelessness, and committing to scholarship in a “post-truth” era. The Ex Corde Center for Catholic Media creates video and other media content to promote positive messages of faith, hope, and love while providing students with the tools, experiences, and contacts they need to enter the 21st century media world as effective communicators. Learn about the Ex Corde media fellows program.