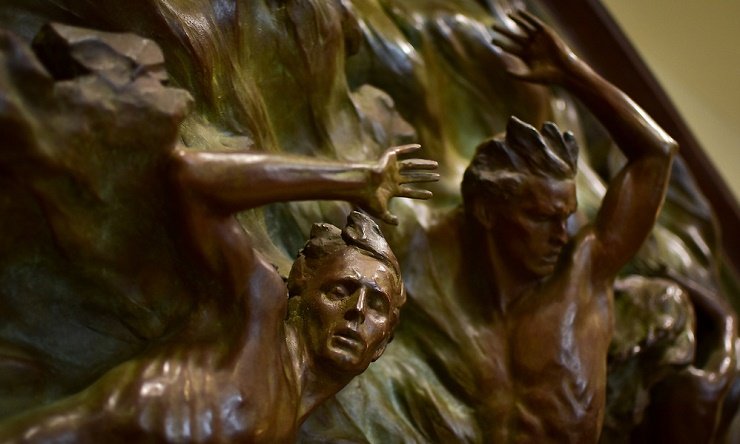 A friend was complaining to me about a nasty email he’d received from a co-worker. I’d seen the missive in question: I’d been copied on it, as had several others. I agreed with my friend, in all honesty, that he had a right to grouse. It had indeed been a vindictive, if not vituperative, communication.

My friend, however, had done the gracious thing. He’d replied with nobility, even with holy gentleness. Doing so had deflated the sender’s ire, and the matter dropped.

That’s not what upset my friend, though. “I’m owed an apology and will never get one,” he told me. Knowing the sender of the email, I had to agree that, barring extraordinary circumstances, he’d probably never get that “Sorry, dude.” Not this side of Paradise, anyway.

“Bring that lack of an apology to Mass,” I joked with him. “Only God can really make something out of nothing.” My friend laughed at that.

When I thought a little more about my jest, though, it occurred to me that there might just be something to the idea.

True forgiveness, after all, has something to do with the whole person, body and soul. To say “I forgive you” can’t be merely equivalent to a “forget about it,” something we’re just willing to overlook, more or less temporarily.

We often see forgiveness, especially in small matters, in this way. Overlooking faults and imperfections is something God asks us to do, yes. But that burning charity doesn’t apply to sins, which need to be forgiven by God.

The saints are unanimous in this regard: we may not disregard even the smallest of actual sins.

That brings us back to which wrongs to overlook, and which God needs to forgive. The objectively malicious email my friend received seems to satisfy the requirements of a sin. In addition to the object itself, the intention was clearly to hurt him, and the known circumstances neither add to nor detract from the sender’s culpability.

If my friend indeed takes the lack of apology to Mass and offers that suffering to God, he is making an act of great faith. To the extent that all sin is a lack of something, all forgiveness participates in filling that lack super abundantly. Indeed, it is the very absence in sin that so injures the soul.

He is always creating us anew, as the Come Holy Spirit prayer teaches. We need only to rely on His promise in confidence.

This appeared at EpicPew.
Image: Ex Nihil by Frederick Hart at Benedictine College.