St. Benedict and the Dictatorship of Hyperbole 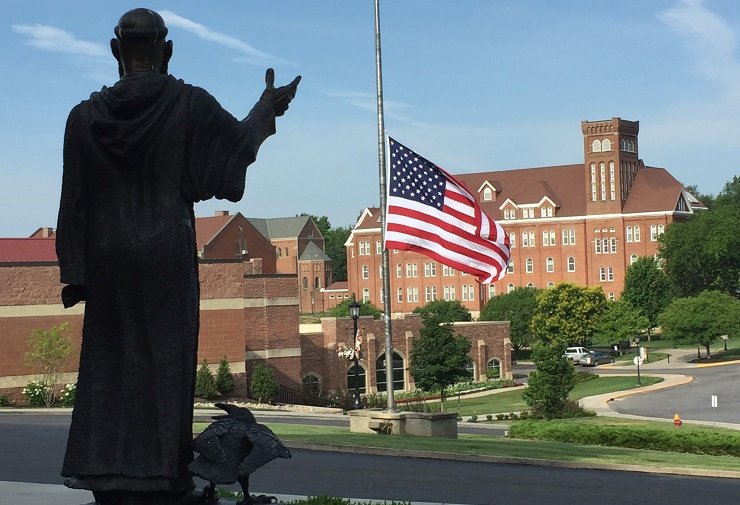 You can see this great need in the terrifying news of the day and you can see it in the comforting force of today’s feast day.

We Catholics are fond of saying that relativism is the great problem of our day, and that is true; but absolutism is also, because relativism leads to crazy, irrational absolutism. When we forget that truth is real and knowable, we relativize things that should be absolute, but we also absolutize what should be relative.

You see a lot of that in the news.

You see it in the snap judgments made this month: We go from these policemen acted wrongly to America’s police are racist. We go from police are brave men whom we appreciate to police can do no wrong.

Ultimately, the nation can only continue to succeed to the degree that we learn to sort what is relative and what is absolute. We have gotten this wrong so often lately:

C.S. Lewis put it well in an illuminating Mere Christianity quote being shared as a meme online. In between images of Trump and Hillary are his words:

The devil “always sends errors into the world in pairs—pairs of opposites—and he always encourages us to spend a lot of time thinking which is the worse. You see why, of course? He relies on your extra dislike of the one error to draw you gradually into the opposite one. But do not let us be fooled. We have to keep our eyes on the goal and go straight through between both errors. We have no other concern than that with either of them.”

Call it the dictatorship of hyperbole. When we lose the way of truth, we wander into extremes.

Today’s saint, Benedict of Norcia, did the opposite. He lived a life of extremes, and then balanced them. He went from being a noble in a prosperous city to living in a cave as a hermit, then combined the civilized order of the first and the raw authenticity of the second in his Holy Rule.

St. Benedict was the great prophet of moderation.

His Rule embraced not just prayer, like those who fled to the deserts; and not just work, like those immersed in the great cities, but prayer and work, both. Ora et labora.

He taught not just daily change, the way of conversion that embraces a new beginning every day, but also stability. And not just stability — staying put and refusing to leave — but also daily renewal, conversatio.

He gave us not just the lone monk facing God in the solitude of his cell, but community life. And not just a community of monks building a miniature civilization of love, but also the individual monk in silence and study.

Pope Benedict XVI took his name because he saw in his namesake’s practical wisdom the answer to our ideologically grotesque world.

“Having recently emerged from a century that was deeply wounded by two World Wars and the collapse of the great ideologies, now revealed as tragic utopias, Europe today is in search of its own identity,” he said. It should look to St. Benedict. “For its moderation, humanity and sober discernment between the essential and the secondary in spiritual life, his Rule has retained its illuminating power even to today.”

There is nothing harder than moderation in our daily choices: Overeating and not eating are both easier than eating just the right amount. At stake is our personal health. But moderation is just as difficult in our intellectual life: The lazy mind prefers to categorize and label ideas to be dismissed or defended; sifting through them is hard. But here, peace and justice are at stake.

It is easy to get caught up in the ideological cross currents that sweep us into extremes. It takes a radical commitment to the truth to withstand the tug and pool.

St. Benedict, pray for us to have the strength to hold the high ground between the devil’s deadly errors. Give us the grace to let go of false assumptions so we can grasp on to true principles, and never let them go.