The Life and Legacy of a Professor, Monk and President 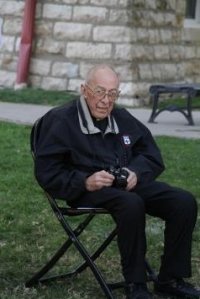 At Benedictine College’s website, this story is accompanied by a gallery of photos. Sunday Jan. 25, Reception and Vigils of the dead, 7:00 p.m. Monday Jan. 26, Mass of Christian Burial, 10:30 a.m.

Father Gerard, president of Benedictine College from 1972 to 1987, received several honors in recent years. In 2011, he received the “Do Something Beautiful for God” award from Benedictine College for his work with families in Atchison. In 2014, he was honored by the St. Benedict’s Abbey Abbot’s Table dinner and St. Benedict School named its sports facility “Fr. Gerard Senecal Gymnasium.”

Speaking to the college student newspaper about his 2011 award, Fr. Gerard reflected on his service as president when St. Benedict’s College and Mount St. Scholastica College merged to form Benedictine College between 1970 and 1971.“The merger was difficult in the sense that you have a lot of emotional ties to the two former schools,” he said, then pointed out that Benedictine College stayed open as many Catholic schools closed.

“The foundation for success was there,” Fr. Gerard said. “We want to act like the unabashedly Catholic institution we should be.”

Father Gerard liked to point out that he hired Larry Wilcox, who became the winningest college football coach in Kansas, and that he arranged for Bob Hope to be a commencement speaker at the college.

“History will find that Fr. Gerard was one of the most influential people in the Abbey’s history,” he said. “He was a talented physics professor at the college — setting the stage for a very strong Physics department at the college.”

Father Gerard then became the college’s longest-serving president, he said, and named two significant achievements for the college. “During his tenure he brought back football as a varsity sport which was instrumental in preserving the college in the 1980s,” Minnis said. “He then was the Pastor at St. Benedict’s Church for 15 years and brought perpetual adoration to the city.”

Said Minnis, “He was an incredibly smart and hard-working man, and he will be missed.”

Born John Carl Senecal, the boy who would take “Gerard” as his religious name was the oldest of seven children born to Lionel John and Clara (Strecker) Senecal. He served daily Mass for Father Flavian Meis, O.F.M. Cap.

His 72-year association with the Catholic community in Atchison began when he started attending Maur Hill Academy in Atchison in 1943. After graduating, he enrolled at St. Benedict’s College (now Benedictine College) to study mathematics. He entered St. Benedict’s Abbey, where his uncle Father Lucien Senecal was a monk, one year later. He graduated in May 1951 and was ordained to the priesthood on May 29, 1954.

His first job at Benedictine College came in 1954-55 when he served as second-floor prefect in Freshman Hall (now Elizabeth Hall). He would go on to earn his M.A. in physics from the University of Michigan and his Ph.D. from Kansas State University.

“A love of learning and a desire for God compelled him to continue his studies, and to be a faithful servant of the Church,” says the St. Benedict Abbey story of his life.

He would further study in the 1960s at the Goddard Space Flight Center in Maryland; the Atomic Energy Commission, Oak Ridge, Tenn; Texas A & M University; and a National Science Foundation post-doctoral year, 1970-71, at the University of California at Berkeley, where he co-authored a paper with renowned Nobel Laureate, Luis W. Alvarez, who had worked on microwave radar research at MIT and had participated in the development of the atomic bomb at Los Alamos.

Beginning in 1970, Father Gerard was on the Merger Planning Committee for the two Atchison colleges. Along with Sr. Mary Noel Walter, Sr. Dunstan Delehant, and Fr. Alcuin Hemmen, he visited other schools around the country that had merged.

After leaving the presidency of the college, Father Gerard worked at Maur Hill from 1987 until 1993, followed by one year, 1993-1994, as the Development Director of the Abbey, where he established the Friends of the Abbey, which still serves the needs of the monastic community.

In 1994 Father Gerard began a new phase of life as a parish priest, serving as Pastor of St. Joseph’s and St. Patrick’s Churches, Atchison, (1994-1998); Pastor of St. Benedict’s and Sacred Heart Churches, Atchison (1998-2013); and Administrator of Immaculate Conception, St. Marys, Kan., and St. Stanislaus, Rossville, Kan. (2013-2014).  He was known for his pastoral care of the sick and elderly, and tireless service to his flock.

“He was one of those towering figures who trusted in Christ and remained faithful in good times and in bad,” says the Abbey story of his life.

Father Gerard was preceded in death by his parents, John and Clara, and by his brothers, William and Richard. He is survived by his two sisters Clare Kearney (Peter), Fredericksburg, Va; Mary Hansen (Ron), Kansas City, Mo; and two brothers: Abbot Barnabas, Atchison; and Nicholas, Hyde Park, Mass.

Love and Sex: Marriage Changes Everything