Seven Reasons to Return to Confession 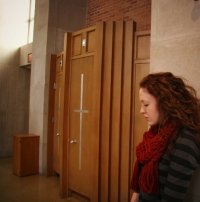 It is the Year of Mercy and Benedictine College is blessed to have a Holy Door on campus. Yesterday, walking to the Abbey to go to confession and pass through the door, I pulled up a Gregorian post to do my examination of conscience. Today we decided to repost two Gregorian pieces about confession, starting with this one today.

At the Gregorian Institute at Benedictine College, we believe it is time for Catholics to imaginatively and vigorously promote confession.

But don’t take our word for it.

Pope Francis tirelessly promotes confession, even in public himself to make the point.

“Everyone say to himself: ‘When was the last time I went to confession?’ And if it has been a long time, don’t lose another day! Go! The priest will be good, and Jesus will be there,” Pope Francis said last year. “Be courageous, and go to confession.”

Pope John Paul II spent his last years on earth pleading with Catholics to return to confession, including in an urgent motu proprio document about confession and in his encyclical on the Eucharist.

He called the crisis in the Church the crisis of confession and wrote to priests: “I feel a pressing need to urge you, as I did last year, to rediscover for yourselves and help others to rediscover the beauty of the sacrament of reconciliation.”

Why all of this angst over confession? Because when we skip confession, we lose the sense of sin. The loss of the sense of sin is at the root of so many evils in our time, from child abuse to financial dishonesty, from abortion to atheism.

So, how to promote confession? Here are some talking points. Seven reasons to return to confession, both natural and supernatural.

A therapist tells the story about a patient who had been in a terrible cycle of depression and self-disgust ever since high school. Nothing seemed to help. One day, the therapist met the patient in front of a Catholic church. They ducked inside when it began raining, and witnessed people going to confession.

“Should I go too?” asked the patient, who had received the sacrament as a child. “No!” said the counselor. The patient went anyway, and emerged from the confessional with her first smile in years, and kept improving in the weeks to come. The therapist studied more about confession, eventually became Catholic and now counsels regular confession for all her Catholic patients.

Sin leads to depression because it isn’t just an arbitrary violation of rules: It’s a violation of the purpose built into our being by God. Confession lifts the guilt and anxiety caused by sin and heals you.

In the movie 3:10 to Yuma, the villain Ben Wade says, “I don’t mess around with doing anything good, Dan. Do one good deed for somebody – I imagine it’s habit forming.” He is right. As Aristotle said, “We are what we repeatedly do.” As the Catechism puts it: “Sin creates a proclivity to sin.” People don’t just lie; they become liars. We don’t just steal; we become thieves. Making a clean break from sin redefines you, allows you to start new habits of virtue.

“God is determined to deliver his children from slavery to lead them to freedom,” said Pope Benedict XVI. “And the worst and most profound slavery is that of sin.”

If you break a favorite item belonging to a friend, you would never be satisfied just feeling regret. You would feel compelled to explain what you did, express your sorrow, and do whatever is necessary set things right.

It is the same when we break something in our relationship with God. We need to say we’re sorry, and try to fix it.

Pope Benedict XVI points out that we should feel the need to confess even if we aren’t guilty of serious sin. “We clean our homes, our rooms, at least once a week, even if the dirt is always the same; in order to live in cleanliness, in order to start again,” he said.  “Something similar can be said about the soul.”

4.  Confessing helps you know yourself.

Confession forces us to look at our lives objectively, separate the real sins from the bad feelings and see ourselves as we really are.

As Pope Benedict XVI put it: “Confession helps us to make our consciences more alert, more open and hence, it also helps us to mature spiritually and as human persons.”

Children need to go to confession, too. Some writers have stressed the negative aspects of childhood confession — being lined up in their Catholic schools and “forced to think of things to feel guilty about.”

Catholic Digest editor Danielle Bean once explained about how her brothers and sisters would tear up their confession lists after confession and drop them down the gutter by the church. “What a liberation!” she wrote “Returning my sins to the dark underworld from whence they had come felt wholly appropriate. ‘Hit my sister six times’ and ‘talked back to my mother four times’ were no longer my burden to bear.”

Confession can give children a place to unburden themselves without fear, and a place to get kindly adult advice when they are worried about speaking to their parents. A good examination of conscience (like this one) can guide children toward appropriate things to confess. Many families make confession an outing, followed up with ice cream.

As the Catechism puts it, mortal sin, unconfessed “causes exclusion from Christ’s Kingdom and the eternal death of hell, for our freedom has the power to make choices forever, with no turning back.”

Over and over again in the 21st century, the Church has reminded us that Catholics guilty of commiting a mortal sin can’t go to communion without confession.

“One commits a mortal sin when there are simultaneously present: grave matter, full knowledge and deliberate consent,” says the Catechism.

The U.S. bishops reminded Catholics about common sins that constitute grave matter in the 2006 document “Happy Are Those Who Are Called to His Supper.” Those sins include: missing Mass on a Sunday or holy day of obligation, abortion and euthanasia, any extramarital sexual activity, theft, pornography, slander, hatred and envy.

7.  Confession is a personal encounter with Christ.

In confession, it’s Christ who heals and forgives us, through the ministry of the priest. We have a personal encounter with Christ in the confessional. Just like the shepherds and Magi at the crèche, we find awe and humility. And just like the saints at the crucifixion, we find gratitude, repentance and peace.

There is no greater accomplishment in life than helping another person return to confession.

We should be willing to talk about confession like we talk about every other significant event in our lives. The offhand comment, “I won’t be able to make it until later, because I need to get to confession,” can be more convicting than a theological discourse. And since confession is a significant event in our lives, it’s an appropriate answer to the question “What are you doing this weekend?” Many of us also have funny or interesting confession stories — tell them.

Help make confession normal again. Let as many people as possible discover the beauty of this freeing sacrament.