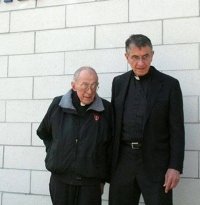 “Brothers and sisters: God is not unjust so as to overlook your work and the love you have demonstrated for his name by having served and continuing to serve the holy ones. We earnestly desire each of you to demonstrate the same eagerness for the fulfillment of hope until the end.”

That was the reading the day after Father Gerard Senecal’s midnight-hour death.

God is good to those who demonstrate this eagerness for the fulfillment of hope. God was good to Fr. Gerard as he labored to help others reach fulfillment in their chosen studies and careers, and in their faith and moral development.

We are, each of us, instruments of our God, instruments for teaching, for nurturing, for sustaining and creating, for encouraging and for correcting. We do these things to become one with those around us, not to gain control or to be demanding.

“Fr. Gerard was the most amazing teacher I ever had. He was knowledgeable, prepared and informed, but most of all he was patient. [Take note of that!] He lectured to non-science majors. He outlined the Quantum Theory, then asked for questions. No one raised a hand. He repeated the theory seven times and never once got upset with us; eventually there were questions.”

“It was his tenacity that kept the college functioning during those difficult years for all of private and Catholic education.“

A parishioner, mother of a young family, told me:

“He was a warrior priest and gave everything to his flock. How he labored for his beloved: his parish, his school, his families, mothers and all those children. He was a truly pro-life priest, in every sense. Life is a gift, so worth living and he did just that.”

“More than 30 years ago I was the alumni director at Benedictine College while Fr. Gerard was president. We travelled together quite a bit, almost always by car. My faith grew as a result of being a passenger while he was behind the wheel. His opinion of the driving ability of nearly all others on the highways fell a bit short of benevolent. He loved to challenge the road and he loved to challenge the gas tank as he tried to get it as close to empty as possible before filling up. We once ran out of gas on a Sunday evening in southern Oklahoma. His ‘Roaming Collar’ served us well in that instance. We covered many miles in the shortest possible time.”

After 15 years as President of Benedictine College, Gerard did student recruitment for Maur Hill, fund raising work for the Abbey, and parish work in Atchison and St. Mary’s. He became a champion of the Sacred Heart Variety Store, convinced the new location in downtown would bring about increased visibility, sales and help to families. As secretary of the Hunger Task Force he helped fund needs of many in Atchison.

Father Gerard was named John Carl at birth, those names being the first names of his two grandfathers, Jean Baptiste Senecal and Carl Strecker. Jean was a schoolteacher in the French speaking community around Damar and Zurich. Fr. Gerard led the way for his siblings in continuing this commitment to being educated and to educate others.

Father Gerard was the oldest child and thus the first to leave Atwood to attend high school in Atchison, as a boarding student.

Our father valued Benedictine community life and encouraged us to study and be good citizens. When John Carl entered the monastery, he bought new bicycles for my twin brother and me with money he had saved. I remember the gathering of relatives in Atwood for Fr. Gerard’s First Mass in 1954, when all of us were treated to a real Western Kansas dust storm. He went to graduate studies in Michigan and Kansas, earning a doctorate in physics. His research, funded by NASA at Kansas State, dealt with the preparation and properties of Indium Antimonide.

He was self-disciplined and sought to help college students be the same — as a teacher and a dorm director, through encouragement and shared conviction. Fr. Gerard was a man with evident determination in whatever task he undertook, as a leader or a participant. Through this kind of dedication, he attracted others.

He was constantly being the minister to others, in education, in parish life, in the welfare of the Abbey community, in concern for legislators at the state and national level. He was generous with his time, sincere in his concern and very capable in his writing skills.

Fr. Gerard was a model of love of parent. After our father died in 1976, he often cooked the evening meal for our mother, in her Atchison home, until her death in 1992. He enlivened her days with humor and kindly attention. His need to accomplish good sometimes led to his mowing all the home lawns on the west side of 2nd street near Mom’s home.

During the last two hours of his life, I held his hands to prevent him from pulling the oxygen tube from his nose, and to say we wanted to help him. He gripped my hands, a expression of appreciation and dependence. I hoped that he would benefit from local rehabilitation programs that would afford him time to be with those with whom he had shared many life accomplishments. Bonds in the Spirit will allow that giving of thanks.

I’ll end with a quote from the writings of Cardinal Newman, often spoken by Fr. Gerard.

“Somehow I am necessary for God’s purposes, as necessary in my place as an Archangel is in his; if, indeed, I fail, He can raise another, as He could make the stones to be children of Abraham. Yet I have a part in this great work; I am a link in a chain, a bond of connection between persons. He has not created me for naught. I shall do good, I shall do His work; I shall be an angel of peace, a preacher of truth in my own place, while not intending it, if I do but keep His commandments and serve Him in my calling.”