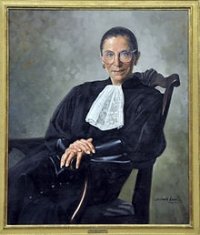 In an earlier piece on the Gregorian Institute Blog, the Hobby Lobby/Conestoga Wood case was discussed mainly from the perspective of the majority (5-4) made public on July 30. The Court tightrope-walked to a decision that “closely held” corporations (limited number of like-minded stock holders) should not have their rights to follow their “deeply held” religious convictions “substantially burdened” by the employer mandate in the Affordable Care Act (aka Obamacare.)

Justice Ginsburg’s stinging dissent merits a discussion of its own.

First let me say I do not intend to parse all 35 pages of Justice Ruth Bader Ginsburg’s dissent.  By my count it was only 7 pages shorter than Alito’s majority opinion. Still, It is important for us to examine this dissent for the logic of its arguments.  Those arguments could well surface somewhere in a future Supreme Court case.  Though the average voter might not realize it, this kind of thing happens quite often.  In close 5-4 votes like this one, the Court invites future litigants to see how far the logic of the case can be stretched, bent or twisted.  Once a clearly frustrated President Thomas Jefferson huffed that the Supreme Court under John Marshall, was given to providing “Twistifications and Pretzel Jobs.”

How ironic that the federal government can require people to buy coverage of things they do not want or need, yet Medicare recipients are surely familiar with the fact that Medicare supplements are needed to cover the costs of things Medicare won’t cover.

Consider the following examples of situations in which an employer does not provide something the worker wants in the employment contract. If a boss provides a luxury company car for executives but does not provide such a car to each employee, has the employer denied the workers access to a Beemer or just said, if you work here, I am not inclined to spend the money for each employee to get one.  If you need such a vehicle as a condition of coming here to work you are welcome to find another company to work for that will pay for what you want. The “choice” is yours. One could have a constitutional right to freedom to move across the country as one wishes, but it is not incumbent on the employer to pay for the trip.  The analogies on this are endless.

So, though Justice Ginsburg’s rhetoric is strong, her logic, dare I say,  is weak. No one could accuse her of pulling her punches.  She characterized the decision as “radical” and being of “startling breadth.” She also warned of “chaotic” and “unintended” consequences.  The dissenting justices seem to be saying that when their perceptions of women’s rights clash with the deeply held religious beliefs of employers, a broad reading of women’s rights trumps conscience and free exercise protections in the first amendment.

Honesty compels me to admit that I am something less than comfortable with the emphasis on “deeply held religious beliefs.”  The issue here is not really contraception itself but providing drugs that are likely to be abortifacient (killing an embryo).  Media love to suggest that the morning after pill, at worst, only kills a “fertilized egg.”  It is not a chicken egg or even a frog egg but DNA would show that “egg” is a member of the human family fully distinct from his or her mother.  When noted political scientist and writer on philosophy, freedom and the Constitution, Professor Hadley Arkes from Amherst, spoke at Benedictine last spring, he made the case  that science and natural law could more than justify protections for the unborn without resorting to “deeply held” religious beliefs.  Sadly, if a law like the “Affordable Care Act” is written so that the public servants who administer it tell us what each shadowy provision means, “deeply held religious beliefs” could be subject to future creative definition despite the intent of the majority in the Hobby Lobby case. They “deeply held” and “religious beliefs could be bureaucratically defined in rules crafted by some “rogue” HHS agent in Cincinnati.  In a secular age, where religious belief is often frowned upon and even laughed at, sadly, the “free exercise” clause of the first amendment will remain in jeopardy unless people of faith fight the good fight and keep the faith.