Hobby Lobby v. Sebelius and the ‘Logic’ of the Contraceptive Mandate 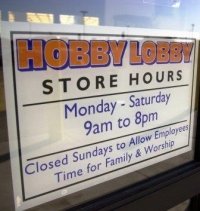 March 25, in a most unusual move, the Supreme Court allocated 90 minutes instead of the common rule of 60 minutes to Oral Argument on the Hobby Lobby v. Sebelius case. The private companies, organized along Christian principles by the Green family of Oklahoma and the Hahn family for Conestoga Wood in Pennsylvania, according to the owners, were suing to overturn the Health and Human Services mandate that all “acceptable” healthcare plans under the Affordable Care Act (often referred to as Obamacare) must include abortifacient drugs under the guise of being contraceptives. The two companies did not want to be complicit in abortions since at least four of the most common contraceptive pills are clearly abortion-inducing drugs.

One of the most telling questions in oral argument came from Justice Kennedy who has acted as a “swing” voter on the Roberts Court as he had on the Rehnquist court before. Kennedy asked  Solicitor General Donald Verrilli, Counsel for the Administration, where do we go from here? Will businesses be asked to pay for abortions next under the Affordable Care Act?

Verrilli noted that abortion was not at issue in this case. Kennedy response was that if contraceptives were included for “health” reasons, the logic of the law, as the Obama Administration framed the argument, clearly led to abortion as another form of healthcare.

In Roe v. Wade and Doe v. Bolton (the twin abortion decisions) states could regulate abortions but only if for the life or health of the mother was protected. Since Roe, the court has been willing to entertain state laws that put restrictions on a woman’s efforts to obtain an abortion (waiting periods, parental notification, judicial bi-pass of parental notification for minors and so on) as long as these restrictions did not present an “undue burden” (in the Planned Parenthood v. Casey case, 1992) on a woman’s choice to have an abortion.

Typically, in court cases involving testing of the constitutionality of a law, the decisions would have to be made on a case by case basis. Thus, a woman’s “right to choose” could come up in a subsequent case.

A similar question arose during Oral argument on the constitutionality of federal restrictions on federal spousal benefits being available to same sex couples (commonly referred to as the Defense of Marriage Act — DOMA US v. Windsor 2013) case. The question arose: If we allow that all state and federal restrictions on same sex unions or “marriages,” are unconstitutional, what other unions or marriages must we allow? Law has a certain logic to it of what will come up next. The Court is often in a quandary over where the decision in one case might lead down the road.

Another question that came up will go a long way to determining whether corporations have a first amendment to “free exercise” of religion by expressing their unwillingness to comply with federal mandates which will require the groups to violate the conscience of their corporate officers and boards.

Corporation, after all, give to charities which connect to ministries which operate around the world. Charitable giving is supposed to make a good corporate “citizen” out of caring businesses.

In the Hobby Lobby and Conestoga Wood cases at least, they try to act, as with everything they do according to their “deeply held” religious principles.

There is an old saying that is applicable here: “Money talks.” The Supreme Court already decided in the Citizens United (Jan of 2010) case a couple of years ago that, corporations could contribute to candidates as a form of freedom of speech.

The Obama administration is consistent. It did not like corporations having a first amendment free speech right nor does it like them having a first amendment “free exercise of religion” right. The President, a former adjunct professor of Constitutional Law, was so dedicated to limiting corporate campaign contributions that he berated the members of the Supreme Court who sitting in front of him in the State of the Union Address following the Citizens United case for getting it wrong. So much for inter-branch decorum and civility.

Some other things need to be considered:

Sadly, these mandates are tangential to the real issue, should people have a right to freely practice (free exercise) their religious principles in the public square, or do they have a right to their religious beliefs only if they keep them behind closed in behind the doors of the church, synagogue, or mosque (freedom to worship). The Obama administration seems in no mood to accommodate.