For All Who From Their Labors Rest: Grandma’s Precious Rosary 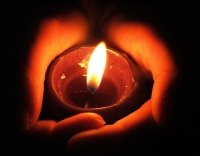 All Saints Day is one of my favorite feast days during the church year.  It reminds us that heaven is our destiny if we but choose to seek the Lord in sincerity and truth.  With all the economic dislocations generating fear today, we might wonder how previous generations dealt with brutally tough times.

Last night, as I was looking at the inscribed rosary that my mother had given me with June 17, 1932 etched on the centerpiece, it came to me that a deep abiding faith is what got many a person of that generation through those incredibly dark days.   She gave me that rosary as I prepared to return to Notre Dame to finish up my dissertation after a year at home ostensibly trying to help her get my dad’s medical practice closed and arrange for the patients.

She knew my coming home to “help” was a thinly disguised excuse for one of the kids (nine living and I was the only one whose commitments permitted it)  to be there with her as she transitioned to life on her own after their 3 year love story came to an earthly end.  As I was preparing, reluctantly I might add, to return to Notre Dame, she brought out a little rectangular cardboard box with a gold braided cover in which she kept a tiny, well-worn golden rosary.  She suggested I take it so that, if I ever had a daughter getting married, she could carry that “something old” with her.  At the time, I had not seen the date etched on it which identified what a treasure it was to her and would be to us.  It was, June 17, 1932.  It was probably the rosary she had carried on her wedding day.

Truth be told, I could relate to Our Lady’s conversation with the angel, Gabriel, recounted in scriptures at the time of the Annuciation.  “How can this be,” I remembered thinking, as no one was on my radar screen to be the mother of my daughter.   She would later tell me that my precious wife, Mary, whom I would never have met had I not returned to the land of the Fighting Irish, was Dad’s gift to me for coming to be with her after he died.  She was not just saying Mary was God’s blessing, it was something she truly believed since she knew in her heart and in prayer that there was indeed, a Communion of Saints and Dad was interceding for us.  Remember her telling me then that she would say to dad, “Joe you can’t just rest in peace, I need help with these children of ours.”  How many of us remember that we can ask the saints in heaven and the holy souls in Purgatory to intercede for us at the Throne of God?

Dr. Joe and Margaret went through some incredibly tough times together.  They married at the height of the Great Depression.  That took courage and great faith.  My mother once told me that for social life, they would get together with friends over peanut butter and jelly sandwiches and a game of cards.  They rotated who would bring which of the ingredients since no one could afford to bring all three.  Those were bleak times even for young people too.

Twenty years, almost to the day, that my father was called from this life, my mother was called to her eternal home.  At one time or another we have all heard that God never gives us burdens too big for us to carry without sufficient graces to bear them.  My mother was living testament to that.  Mom and dad were a study in contrast.  He was 6’4” and she was 5’2” tall.  He once told me when I worried I would not be big like him because I was such a tiny kid, “Its not how big you are, he said to me, but how tight you’re wound.” Mom was little and tightly wound.  I guess her faith, like her stature, was the size of a mustard seed.  We all know from the parable what that means.  But her faith more than made up for her slightness of stature.  She could bear her burdens with people many times her size.

When we children were growing up we prayed the Sacred Heart of Jesus consecration prayer around the dinner table, after the nightly family rosary, of course.  One of the lines in it reminded us to “Bear one another’s burdens in peace, harmony, and unselfishness.”

The year before my Dad suddenly died, he and mom lost twin grandsons (Joey and Donny) at birth, and shortly thereafter another grandson (Kennie) at 4 from results of a birth defect.  Within two years or so, our brother Joe (35) died of complications from surgery, and our sister Sue (also in her 30s) of complications from pneumonia.  Parents are not supposed to outlive their children.  What a loss she must have felt.  She bore that burden like so many others with the dignity and assurance born of a deep and abiding faith.

At Suzie’s wake, I remembered hearing someone say to my mom, “Margaret, after losing all of these loved ones in such rapid fire succession, aren’t you angry with God?”  Mom, knowing that God had an in Eternal Blueprint, said, “How can I be angry with God? He made them.  I am thankful for the time that He shared them with me.”

She always loved to say that, “when the angel comes for me, I’ll be hiding under the bed.”  She went in for tests and she asked not to stay overnight at the hospital but to just come home.  The next day she was to return in the afternoon for more tests. She had not been particularly ill before that time.  As lunch time came, the caregiver who came to help after the emergency room run, offered to get lunch for her.  She told the lady, “No, I’m not particularly hungry.  Why don’t you get my family album for me and my rosary.”  She probably knew what was going on since she had been with a number of her life long friends as they prepared to meet their Maker.  She swore God had given her the job of preparing those dear women when their time came.

The caregiver left her to herself for a while.  A few minutes later, when she came back to check on our Mom, she found her, rosary in hand, slumped over the album unconscious.  Anyone who knew her should not be surprised that Mary was with her at the hour of her death interceding for her and her family.  She died a few hours later at St. Mary’s Hospital, the very place my Dad had practiced as a surgeon. What she had asked in well over 70 years of rosaries must surely have come to pass.  As she was asking Mary in the Hail Mary, Our Lady was surely interceding for her at the hour of her death.

May she, and all the souls of the faithful departed, rest in peace.  Notice that is rest in peace.  Our loved ones better not sleep.  Can’t speak for others, but some of us need all the help we can get.  Pray for the Holy Souls in Purgatory. Holy Saints, intercede for us.  St. Joseph, Patron of a Happy Death, pray for us.