The Narnian and the New Evangelization 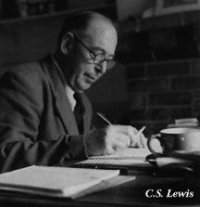 By Ron Ratliff | A former Protestant pastor and a scholar who has published works on C.S. Lewis and G.K. Chesterton, Mr. Ratliff entered the Catholic Church at 2011’s Easter vigil. He currently serves as reference librarian and adjunct professor at Manhattan Christian College in Manhattan, Kan.

Ever since I heard about Benedictine College’s upcoming Symposium on Advancing the New Evangelization, which will focus on how to participate in the work of the Church as educators and evangelists, I’ve thought of C.S. Lewis, renowned Christian apologist and author of The Chronicles of Narnia.

Although Lewis was an Anglican, he provides a great model for Catholic academics who wish to be scholars whose work (in any discipline) helps advance the New Evangelization.  He is an excellent example of a man committed to Christ and a man well-known and accomplished in his field of study.

C. S. Lewis was a man of rare gifts: he earned three first class degrees from Oxford University over a three year period; from the time of his conversion in 1931 until his death in 1963 he published about thirty books and wrote an estimated fifty-thousand letters over his life time. Yes, everyone who wrote to Lewis got a personal reply back from him. For twenty-nine years, he laboured as a tutor at Magdalen College Oxford. He was passed over numerous times for professorships, even though he was considered a top scholar in his field of medieval and Renaissance literature. You see, Lewis was guilty of two major crimes as an academic:  He wrote popular books and he wrote outside of his field of expertise.

Because of his “crimes” the world has been blessed with Mere Christianity, The Great Divorce, The Screwtape Letters, The Abolition of Man, The Chronicles of Narnia and others which thousands credit with helping them to embrace the Christian faith.  In 1954 Cambridge University came calling and, after several attempts, finally persuaded Lewis to become the first Chair of Medieval and Renaissance Literature. It was a decision that Lewis would be glad he accepted. His final years in academia freed him to do things he had never been able to do at Oxford, especially not being a tutor anymore. But that does not mean he stopped being a teacher.

Lewis’ work as a scholar and teacher is unquestioned. He produced the book The Discarded Image, which was the substance of his lectures he gave every year at Oxford. There was never an empty seat at these lectures and if you managed to arrive late, you could forget about getting a seat. He also produced a volume in the Oxford History of English Literature (what Lewis referred to as his OHEL book) entitled English Literature in the Sixteenth Century Excluding Drama. The book took him twenty-five years to write and is still in print under a different title. Lewis read every book in the Bodleian Library that was published in the sixteenth century! The result is a magnificent collection of essays about the period and its literature. Then of course there was his work as a tutor. Alan Jacob notes in his biography of Lewis, The Narnian, “…though he found much of the work (of being a tutor) sheer drudgery, he knew the difference that he could make in the lives of his pupils by sheer kindness” (p.311). Many of Lewis’ students have testified to his many generosities as a tutor.

Lewis’ work as an evangelist is well known. During World War II, he traveled around England giving evangelistic talks at military installations. He is best known for his live weekly BBC addresses on the basics of Christianity. In fact, it has been said that during the war Lewis’ voice was the most recognized voice on the radio next to Winston Churchill. Unfortunately, only the final broadcast’s recording has survived. Those radio addresses became the basis for Mere Christianity.  Another of his evangelistic efforts involved his co-founding the Oxford Socratic Club. This was a venue during the school year that provided a platform for Christians and atheists to debate. Often, Lewis was the main speaker for the Christian side and, like his lectures, late comers could not get a seat. Lewis was a part of the Socratic Club from its founding in 1940 until he left for Cambridge in 1954.

Truly Lewis’ life was a perfect blend of educator and evangelist, a scholar who possessed some saint-like qualities. His commitment to his field of study and his desire to bring others to Christ is an inspiration to all who work in the Lord’s vineyard.  He provides a great example of a scholar whose field of study—and personal life and witness—can advance the New Evangelization.